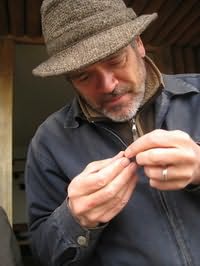 Scotland (b.1951)
Husband of Lesley Glaister
Andrew Greig is a poet and novelist. He was born in Bannockburn in Scotland and educated at the University of Edinburgh. He lives in Orkney and Sheffield.
Novels
Electric Brae (1992)
The Return of John MacNab (1996)
When They Lay Bare (1999)
That Summer (2000)
aka The Clouds Above
In Another Light (2004)
Romanno Bridge (2008)
Fair Helen (2013)

Upstairs in the Tent (2001)
Cynthia Rogerson
"A real page-turner, witty and touching and true. I read it with delight."

Afterlife (2009)
Sean O'Brien
"A convincing, darkly comic and painful take on the astonishingly poisonous world of poetry and literary aspiration."

Mussolini's Island (2017)
Sarah Day
"A thoroughly absorbing and moving novel, one that convincingly illuminates a strange and largely forgotten aspect of life in Fascist Italy."