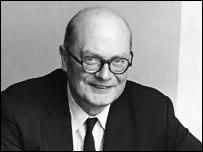 (1910 - 1987)
Hugh Greene came to prominence as a journalist when he became a chief correspondent in Nazi Berlin. After being expelled from Germany just before the outbreak of the Second World War he served in the RAF as an interrogator. Greene went on to join the BBC and was made Director-General in 1960.
Anthologies edited
The Spy's Bedside Book (1957) (with Graham Greene)
The Rivals of Sherlock Holmes (1970)
Cosmopolitan Crimes (1971)
Crooked Counties (1974)
The American Rivals of Sherlock Holmes (1976)
The Pirate of the Round Pond (1977)
Victorian Villainies (1984)