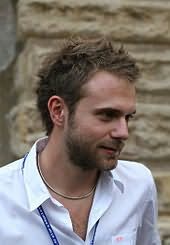 Italy (b.1982)
Paolo Giordano was born in December 19, 1982, in Turin, Italy. He studied physics at the University of Turin and holds a PhD in theoretical particle physics. The Solitude of Prime Numbers, his first novel, has sold over a million copies and was translated into thirty languages.

The Italian language film based on the novel was released in September 2010.

Buzz Aldrin, What Happened to You in All the Confusion? (2011)
Johan Harstad
"There's so much music, exhuberance, bewilderment, and sweet melancholy in Johan Harstad's Buzz Aldrin. It's roch 'n' roll, then heartbreaking, then rock 'n' roll again. I devoured every line."