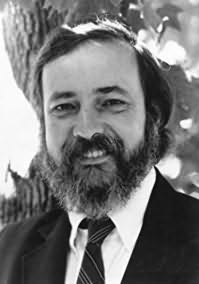 (1943 - 1986)
Russell M. Griffin (1943-1986) was a science-fiction author and medievalist. Born in Stamford, CT, Griffin grew up primarily in Massachusetts. After receiving a PhD in English from Case Western Reserve University, he took a position at the University of Bridgeport teaching Middle English literature, fiction, and lots of freshman comp.

Griffin began writing fiction in his early 30s, and in his brief career, he published four novels and many short stories. His work often focused on civilizations in collapse -- whether our own or those of the distant future -- and his imaginative, mordant novels and short stories quickly attracted praise. His last novel, The Timeservers was a finalist for the Phillip K. Dick award in 1985. Tragically, he died the next year, at age 43. "Griffin's premature death halted a career which could have soared." --John Clute

"Griffin was at the forefront of mid-twentieth century science fiction. . . his imagination combined both controversial political ideologies of the time and a sense of their future implications. . . Each uniquely provocative and mesmerizing, Griffin's works have often drawn comparisons to the like of Kurt Vonnegut and John Sladek." --Omni Reboot