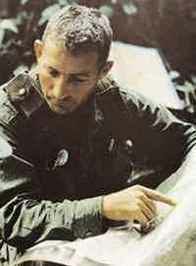 (1930 - 2005)
Colonel David Haskell Hackworth, also known as "Hack", was a highly decorated soldier, having received 24 decorations for heroism in combat from the Distinguished Service Cross to the Army Commendation Medal. He was a prominent military journalist. During his time as a journalist, Hackworth investigated many subjects, including an assertion into the accused improper wearing of ribbons and devices by Admiral Mike Boorda, an investigation which is speculated to have driven Boorda to committing suicide.

Hackworth is also known for his role in the creation and command of Tiger Force, a military unit formed during the Vietnam War to apply guerrilla warfare tactics to the fight against Vietnamese guerrillas.
Novels
The Price of Honour (1999)