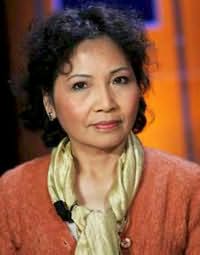 Vietnam (b.1947)
Dng Thu Hng is a Vietnamese author and political dissident. Formerly a member of Vietnam's communist party, she was expelled from the party in 1989, and has been denied the right to travel abroad, and was temporarily imprisoned for her writings and outspoken criticism of corruption in the Vietnamese government.

Born in 1947 in Thai Binh a province in northern Vietnam, Dng came of age just as the Vietnam War was turning violent. At the age of twenty, when she was a student at Vietnamese Ministry of Cultures Arts College, Dng Thu Hng volunteered to serve in a womens youth brigade on the front lines of The War Against the Americans". Dng spent the next seven years of the war in the jungles and tunnels of Binh Tri Thien, the most heavily bombarded region of the war. Her mission was to sing louder than the bombs and to give theatrical performances for the North Vietnamese troops, but also to tend to the wounded, bury the dead, and accompany the soldiers along. She was one of three survivors out of the forty volunteers in that group. She was also at the front during Chinas attacks on Vietnam in 1979 during the short-lived Sino-Vietnamese War. However, in the period after Vietnams reunification in 1975, Dng became increasingly outspoken and critical about the repressive atmosphere created by the Communist government. Upon seeing the conditions in the South compared with the North she began speaking out against the communist government.
Dng moved to Paris in 2006. In January 2009, her latest novel, nh Cao Chói Li, was published; it was also translated into French as Au zénith.