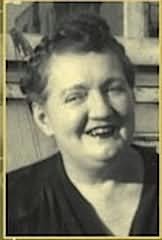 (1889 - 1955)
Elizabeth Sanxay Holding was born and brought up in New York and educated at Miss Whitcombe's and other schools for young ladies. In 1913 she married George Holding, a British diplomat. They had two daughters and lived in various South American countries, and then in Bermuda, where her husband was a government official. Elisabeth Sanxay Holding wrote six romantic novels in the 1920s but, after the stock market crash, turned to the more profitable genre of detective novels: from 1929-54 she wrote eighteen, as well as numerous short stories for magazines. In 1949 Raymond Chandler chose her as 'the best character and suspense writer (for consistent but not large production)', picking The Blank Wall (1947) as one of his favourites among her books; it was filmed as The Reckless Moment in 1949 (by Max Ophuls) and as The Deep End (with Tilda Swinton) in 2001. After her husband's retirement the Holdings lived in New York City. Her series character was Lieutenant Levy.

Genres: Mystery
Series
Heaven's Falling
Too Many Bottles (1951)
aka The Party Was the Pay-Off
The Virgin Huntress (1951)