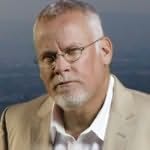 (b.1956)
A former police reporter for the Los Angeles Times, Michael Connelly is the internationally bestselling author of the Harry Bosch thriller series. The TV tie-in series - Bosch - is one of the most watched original series on Amazon Prime and is now in its third season. He is also the author of several bestsellers and has been President of the Mystery Writers of America. His books have been translated into thirty-nine languages and have won awards all over the world, including the Edgar and Anthony Awards. He spends his time in California and Florida.

The Innocents (1995)
(Wil Hardesty, book 1)
Richard Barre
"A gripping story that opens doors on an intriguing world of mystery, deceit and murder."

An Educated Death (1997)
(Thea Kozak, book 4)
Kate Flora
"Kate Flora does what all great writers do, she takes you inside unfamiliar territory and makes you feel right at home."

Cows (1998)
(Little House on the Bowery, book 1)
Matthew Stokoe
"Beautifully written and deeply gripping, this is a great read. I'm already looking forward to the next one from Matthew Stokoe."

The Poster Boy (1999)
Stephen Solomita
"This is old-fashioned story-telling at its best."

The Jook (1999)
Gary Phillips
"Gary Phillips wries tough and gritty parables about life and death on the mean streets."

Stone Quarry (1999)
(Bill Smith, Lydia Chin, book 6)
S J Rozan
"STONE QUARRY is S. J. Rozan at her best... the tension and intrigue never let up. She constantly has you looking over your shoulder into the dark."

Blindsided (2000)
(Jane Candiotti, book 2)
Clyde Phillips
"Moves with the speed of a bullet and has more twists and turns than the streets of San Francisco."

1st to Die (2001)
(Women's Murder Club, book 1)
James Patterson
"Patterson boils a scene down to the single, telling detail, the element that defines a character or moves a plot along. It's what fires off the movie projector in the reader's mind."

In a True Light (2001)
John Harvey
"John Harvey writes the way we all wish we could write. Elegiac and eloquent, his stories filled with the blood of true character."

Kisscut (2002)
(Grant County, book 2)
Karin Slaughter
"This is crime fiction at its finest."

Flesh and Blood: Guilty As Sin (2003)
Max Allan Collins and Jeff Gelb
"This is the stuff of literary Viagra."

Screwball (2003)
David Ferrell
"This book sneaks up on America, where winning is everything, and bites it on the seat of the pants. It is dark satire at its best."

To the Bone (2003)
(Carroll Monks, book 3)
Neil McMahon
"Neil McMahon's thrillers have the precision of a surgeon's scalpel."

Crossing the Line (2004)
(Antonio Burns, book 4)
Clinton McKinzie
"Clinton McKinzie delivers a story pulsing with intrigue and character that is as poetic as it is harrowing."

A Taint in the Blood (2004)
(Kate Shugak, book 14)
Dana Stabenow
"Kate Shugak is the answer if you are looking for something unique in the crowded field of crime fiction."

Immoral (2005)
(Jonathan Stride, book 1)
Brian Freeman
"A page-turner of the highest calibre. It has enough twists and turns to keep you guessing until the end."

Cold Blooded (2005)
(Detective McQueen, book 2)
Robert J Randisi
"Robert Randisi is a master of the genre. He's one of the best."

Flesh and Blood (2005)
(John Jordan Mystery)
Michael Lister
"Michael Lister may be the author of the most unique series running in mystery fiction."

Cruel Poetry (2007)
Vicki Hendricks
"I loved this book. It's a private ticket into a secret world of desire and sex and the raw edge between them."

Ghosttown (2007)
(Whitney Logan Mystery, book 3)
Mercedes Lambert
"For these characters, one book was not enough, now we have three and I still feel shorted. After this I will miss Whitney and Lupe and the strange, wonderful people they encounter. I will miss them for a long, long time."

Blood Rose (2007)
(Clare Hart, book 2)
Margie Orford
"Margie Orford has nailed it. Blood Rose is wonderfully crafted and fully engrossing. It's a book that stays with you, even after the last page is turned."

Shakedown (2008)
(Jack Davis Mystery, book 1)
Joel Goldman
"Locked and loaded and full of the blood of character and the gritty detail that make up the truth - I loved it."

Quiver (2008)
Peter Leonard
"With its clever plotting and blood-and-guts characters, Quiver will certainly put Peter Leonard on the map. This is the start of something special."

Cemetery Road (2009)
Gar Anthony Haywood
"A powerful novel. Beginning to end, it never loses its grip... The book is a wonderful achievement."

The Perfect Woman (2010)
(John Stallings, book 1)
James Andrus
"This book moves with a deadly speed and the assured hand of a writer who knows his stuff."

Eyes of the Innocent (2011)
(Carter Ross Mystery, book 2)
Brad Parks
"This book held me hostage until the last page."

Children of the Street (2011)
(Darko Dawson, book 2)
Kwei Quartey
"Searing and original and done just right... Inspector Darko Dawson is relentless, and I look forward to riding with him again."

To Kill a Queen (2012)
(Thorn Savage NYPD, book 5)
John Mackie
"To John Mackie, Harry Bosch would go through a door with you anytime, anywhere!."

Palmetto Blood (2012)
(Jack Connor Mystery, book 1)
Reed Bunzel
"A winner. It sweeps you in with intrigue and authority and never lets you go. I want to go riding with Jack Connor again."

The Paris Deadline (2012)
Max Byrd
"This is storytelling at its very best."

The Disposables (2014)
(Bruno Johnson, book 1)
David Putnam
"I really loved The Disposables. It's raw, powerful and eloquent. It's a gritty street poem recited by a voice unalterably committed to redemption and doing the right thing in a wrong world. I'll be first in line for the next one from David Putnam."

The Ways of the Dead (2014)
(Sully Carter, book 1)
Neely Tucker
"The Ways of the Dead is a great read. Deep characters, pitch perfect dialogue and a plot with as many curves as the Rock Creek Parkway as it moves through the side of Washington D.C. far away from the Smithsonian. Neely Tucker takes this novel up an even further notch with a story framed around the hot button issues of our time, including race, justice and the media. If this is Tucker's first novel, I can't wait for what's coming next."

The Plea (2016)
(Eddie Flynn, book 2)
Steve Cavanagh
"Expertly combines his authority on the law with an absolutely great thrill ride."

The Catalina Eddy (2017)
Daniel Pyne
"Pyne flips all the standards upside-down with Catalina Eddy and in the process delivers a classic California noir - times three. This is Pyne’s masterpiece. I guarantee no reader will go wanting."

Safe (2017)
Ryan Gattis
"SAFE is a propulsive thriller that confirms Ryan Gattis as one of our most gifted novelists. The book has unstoppable momentum yet is as finely layered and detailed with the gritty truth of life and the streets as I've ever read. It shoots you down a path that is fraught with surprise and insight, and you can't ask for more than that."

The Escape Artist (2018)
(Zig and Nola, book 1)
Brad Meltzer
"THE ESCAPE ARTIST is a slingshot of a novel. Brad Meltzer expertly pulls it back and lets it go, propelling the unlikeliest of heroes forward in a high stakes, high tension thriller that never lets you catch your breath. My advice: Buckle up!"

Last Ferry Home (2018)
(Michael O'Higgins, book 1)
Kent Harrington
"No one writes about the heart of darkness like Kent Harrington."

Body On the Backlot (2018)
(Red Carpet Noir, book 1)
Eva Montealegre
"Montealegre knows the secret, the best crime novels are not only about how a cop works on a case, but how a case works on a cop. Detective Joan Lambert is a refreshing new character and I'd like to see more."

The President is Missing (2018)
Bill Clinton and James Patterson
"This book moves like Air Force One. Big and fast."

Miraculum (2019)
Steph Post
"Steph Post's stories carry a dark pulse that keeps the perfect beat in a world where people put everything they've got on the line."

The Night Agent (2019)
Matthew Quirk
"This story is impossible to put out of mind.... Relevant and revealing, this is one of the best thrillers to come along in years."

My Detective (2019)
(Sam Carver, book 1)
Jeffrey Fleishman
"From the first page My Detective moves as smooth as a bullet train through the shadowy world of night. Its hypnotic prose and scintillating characters guarantee that once you're on board you'll be riding this one to the end."

Lost Hills (2020)
(Eve Ronin, book 1)
Lee Goldberg
"Lost Hills is Lee Goldberg at his best. Inspired by the real-world grit and glitz of LA County crime, this book takes no prisoners. And neither does Eve Ronin. Take a ride with her and you’ll find yourself with a heroine for the ages. And you’ll be left hoping for more."

Purgatory Bay (2020)
(Bleak Harbor, book 2)
Bryan Gruley
"Purgatory Bay is a knockout! Bryan Gruley has populated this eerie story with a cast of characters who range from menacing to heroic and together create a whirlwind of momentum that makes this one impossible to put down."

The Chill (2020)
Scott Carson
"Horror has a new name and it’s Scott Carson. The Chill is an eerie dive into the murky depths of the supernatural. A story that has you looking back over your shoulder on every page."

Line of Sight (2020)
(Line of Sight, book 1)
James Queally
"LINE OF SIGHT signals the start of a great career. Veteran journalist James Queally brings all his insider knowledge of the intersections of crime and police and politics and media in a story that never stands still for a single page. It’s an amazing first novel."

A Blind Eye (2021)
(Jack Paris , book 3)
George Fong
"Deftly written and propulsive, this novel takes the reader on a you-are-there journey that never slows down."

Razorblade Tears (2021)
S A Cosby
"Razorblade Tears is superb. No doubt, S. A. Cosby is not only the future of crime fiction but of any fiction where the words are strong, the characters are strong and the story has a resonance that cuts right to the heart of the most important questions of our times."

Clark and Division (2021)
Naomi Hirahara
"A beautifully written novel. A telling and touching story that echoes across the decades. Naomi Hirahara uses the past to inspire us to be relentless in doing the right thing, right now."