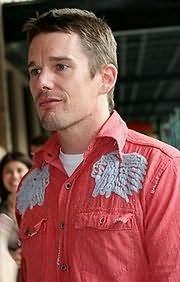 (b.1970)
Ethan Hawke is an American actor, writer and film director. He landed his first feature role in the movie Explorers in 1985 opposite River Phoenix. He then appeared in a supporting role in the drama Dead Poets Society (1989), which was considered to be Hawke's break-through role.