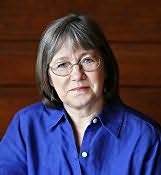 A pseudonym used by Megan Lindholm
Robin Hobb is a confirmed believer not just in research, but in attempting to experience the things she is writing about. When, at the age of ten, she moved with her family from California to Alaska, it shaped her as a writer more than any other experience in her life. In the early stages of her writing career she established herself as an author under the name 'Megan Lindholm', creating such fine works of modern fantasy as Wizard of the Pigeons, Harpy's Flight, The Windsingers, and The Reindeer People. In 1992 she decided to embark upon something of greater epic scope. To mirror that change, she chose a new name, 'Robin Hobb'. She is Voyager's fastest-selling author in backlist and has now sold over 1 million copies of her paperbacks.

Collections
The Inheritance (2005) (with Megan Lindholm)

Novellas
The Wilful Princess and the Piebald Prince (2013)

The Last Dragonlord (1998)
(Dragonlords, book 1)
Joanne Bertin
"The Last Dragonlord by Joanne Bertin features villains who have not lost their humanity, and heroes who are still capable of making mistakes. Court intrigues are entangled with unabashed romance in this fast paced and satisfying story. The reader gets a sense of the world's rich history and unique magic."

Hidden Warrior (2001)
(Tamir Triad, book 2)
Lynn Flewelling
"The story pulled me under and carried me off with it."

Myrren's Gift (2005)
(Quickening, book 1)
Fiona McIntosh
"It's a 'just one more chapter' sort of book. Don't start reading Myrren's Gift in the evening if you have to get up early the next morning."

The Rose of the World (2005)
(Fool's Gold, book 3)
Jude Fisher
"Relentlessly sweeping from the first page."

The Magicians and Mrs. Quent (2008)
(Mrs. Quent, book 1)
Galen Beckett
"A charming and mannered fantasy confection with a darker core of gothic romance wrapped around a mystery. Fans of any of these will enjoy it. Readers who enjoy all these genres will find it a banquet."

The Demon King (2009)
(Seven Realms, book 1)
Cinda Williams Chima
"The Demon King is a page-turner for any reader, regardless of age."

The Conqueror's Shadow (2010)
(Corvis Rebaine, book 1)
Ari Marmell
"A story of desperate people in dangerous times. A great mix of characters and action."

Winter Be My Shield (2012)
(Children of the Black Sun, book 1)
Jo Spurrier
"Unlikely heroes, villains you will cheer for, and cold that eats your bones. Winter Be My Shield will take you to an unforgiving place, but you won't want to leave it."

Shadowplay (2013)
(Micah Grey Trilogy, book 2)
Laura Lam
"Pantomime took me into a detailed and exotic world, peopled by characters that I'd love to be friends with...and some I'd never want to cross paths with."

Twelve Kings in Sharakhai (2015)
(Song of the Shattered Sands, book 1)
Bradley Beaulieu
"Twelve Kings in Sharakhai is the gateway to what promises to be an intricate and exotic tale. The characters are well defined and have lives and histories that extend past the boundaries of the plot. The culture is well fleshed out and traditional gender roles are exploded. Çeda and Emre share a relationship seldom explored in fantasy, one that will be tried to the utmost as similar ideals provoke them to explore different paths. I expect that this universe will continue to expand in Beaulieu's skillful prose. Wise readers will hop on this train now, as the journey promises to be breathtaking."

Truthwitch (2016)
(Witchlands, book 1)
Susan Dennard
"Truthwitch by Susan Dennard is like a cake stuffed full of your favourite fantasy treats: highway robbery, swordplay, deep friendships, treachery, magic, piracy on the high seas, and romance. If you like any or all of the above in the fantasy tales, this book will delight you."

Witchsign (2018)
(Ashen Torment, book 1)
Den Patrick
"Witchsign triggered that ‘I can’t wait to get back to it’ feeling in me. The current of the story caught me right away and I was swept along with the characters. Den Patrick hit the perfect mix of immediate action and characters I cared about. His prose wastes no words. (I loved the concept of the cinderwraiths!)"

City of Lies (2018)
(Poison Wars, book 1)
Sam Hawke
"If the first line doesn’t make you buy this book, you should turn in your fantasy-lover’s badge. City of Lies got me through sitting seven hours in an airport, and proves that a tale about the one who risks his life to thwart assassins can be as compelling as any assassin’s tale."

Street Freaks (2018)
Terry Brooks
"I didn’t expect it to become, 'Just one more chapter and I’ll turn out the light, dear.' But it did. Street Freaks is a completely engrossing story."

Kingdom of Copper (2019)
(Daevabad Trilogy, book 2)
S A Chakraborty
"Even a few pages will will enmesh you in its magic."

Seven Blades in Black (2019)
(Grave of Empires, book 1)
Sam Sykes
"Seven Blades in Black offers villains that are as memorable and unique as the heroes. Action, magic, romance and humor mingle well in this mammoth tale. It's an immersive read in a well realized world."

One Word Kill (2019)
(Impossible Times, book 1)
Mark Lawrence
"One Word Kill is the kind of story that will stay with you for a lifetime."