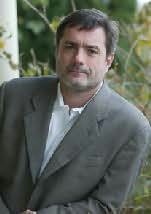 (b.1954)
James Hime is a writer and entrepreneur who lives in Texas with Paulette, his beloved wife of thirty-nine years. The Himes have two grown sons, one on Wall Street and the other in Hollywood.

Jim is a survivor of an infamous terrorist attack, the Great East Coast Blackout of 2003, a few days at Burning Man 2008, a couple of start-up businesses, an outright business failure and attendant Chapter 7 bankruptcy (which became the subject of an article in the nation's leading financial newspaper), multiple household relocations, including twelve years of exile on the East Coast, the death of an aged and beloved golden retriever (whom he still misses) and almost twenty years of practicing tax law.  Jim is a proud graduate of the University of Texas at Austin, both undergraduate and law school.

He loves reading great writers, running distances to the onset of exhaustion, and listening to all kinds of music.
Series
Jeremiah Spur Mysteries
1. The Night of the Dance (2003)
2. Scared Money (2004)
3. Where Armadillos Go to Die (2009)