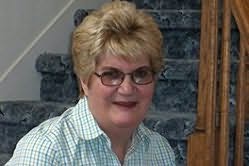 (b.1943)
Jennie Hansen graduated from Ricks College in Idaho, then Westminster College in Utah. She has been a freelance magazine writer, newspaper reporter, editor, and librarian.
Her published novels fall in several genre categories including romantic suspense, historical, and westerns.
She was born in Idaho Falls, Idaho, and has lived in Idaho, Montana, and Utah. She has received numerous first and second place writing awards from the Utah and National Federation of Press Women and was the 1997 third place winner of the URWA Heart of the West Writers Contest. She also was a recipient of the Whitney Awards Lifetime Achievement Award for 2008. She currently writes a weeky review column for Meridian Magazine.
Jennie has been active in community affairs. In addition to ward and stake responsibilities in the LDS church, she served a term on the Kearns Town Council, two terms on the Salt Palace Advisory Board, was a page for the Utah State Legislature for two sessions, and was a delegate to the White House Conference on Libraries and Information Services.
Jennie and her husband live in Utah. Their five children are all married and have provided them with thirteen grandchildren. When she's not reading or writing, she enjoys spending time with her grandchildren, gardening, and camping.