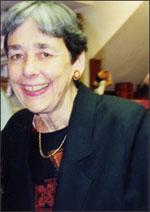 (b.1934)
Robin graduated from Germantown Friends School and Smith College (BA/English). While her two daughters were young she owned and operated a printing/advertising firm Barnhouse Press from her home (there was a printing press in the barn and one in the house) and did freelance writing and photography. One daughter claims she was lulled to sleep by the methodical beat of a printing press in the kitchen and a close friend claimed she once found ink in her mashed potatoes!

But Robin had always wanted to write, and on her 50th birthday her husband told her, "It's now or never." So she began. She wrote three mystery novels in three years featuring Dr. Andrew Fenimore, an old-fashioned cardiologist who still made house calls. Robin's amateur sleuth was patterned after her husband, who just happened to also be a cardiologist.

When Robin isn't writing, she does free lance editing, teaches mystery writing, and lectures on the mystery novel at schools, libraries, and other institutions. Her short stories have appeared in Ellery Queen Mystery Magazine, Arthur Hitchcock Mystery Magazine and Death Knell.
Robin divides her time between Philadelphia and New York City.
Series
Doctor Fenimore
1. The Doctor Digs a Grave (1998)
2. The Doctor Makes a Dollhouse Call (2000)
3. The Doctor and the Dead Man's Chest (2001)
4. The Doctor Dines in Prague (2003)
5. The Doctor Rocks the Boat (2006)

Getting Old Is Murder (2005)
(Gladdy Gold, book 1)
Rita Lakin
"My great aunt once told me, 'Getting old is no fun.' She obviously had never met Gladdy Gold! A fine debut mystery, full of humor, pathos, and even--romance. I hope to see many more."