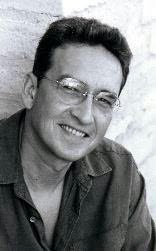 (b.1952)
Pete Hautman is the author of many well received young adult novels, one of which, Godless, won the National Book Award for Young People's Literature. Hautman moved to St. Louis Park, Minnesota at the age of five. He later graduated from St. Louis Park High School and attended the Minneapolis College of Art and Design and the University of Minnesota over the next eight years, without receiving a degree from either institution. After working at several jobs which he describes as "ill-suited", Hautman published his first novel, Drawing Dead, in 1993. He loves to cook, has two small dogs, and is currently living with mystery writer Mary Logue. Pete Hautman is a popular author and has made multiple works that can directly relate to the young or adolescent reader.