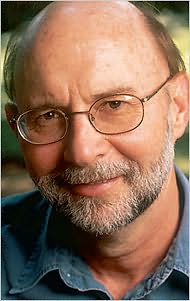 (b.1948)
Stephen Harrigan was born in Oklahoma City and has lived in Texas since the age of five, growing up in Abilene and Corpus Christi.He lives with his wife, Sue Ellen,and their three daughters, Marjorie, Dorothy and Charlotte.

The Tentmaker (2002)
Clay Reynolds
"Poignant...This story, about a man who makes his mark on the world despite his best efforts not to, is a faulty constructed and substantive work."

Wolves of Eden (2018)
Kevin McCarthy
"When it comes to saturation-level historical authenticity - the sense of being there, alive and at large in the vanished past - I think Kevin McCarthy is in the company of masters like Patrick O’Brian and Hilary Mantel. Wolves of Eden is also a shiningly humane novel, all the more credible for being told by an Irish author, about the immigrant soldiers who found themselves on the front lines during the harrowing seizure of the American West."