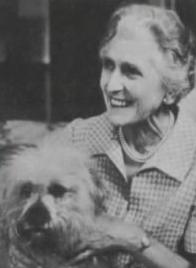 Elizabeth de Beauchamp Goudge was born on 24 April 1900 in the cathedral city of Wells, she moved with her family to Ely when her father, a clergyman, was transferred there. When her father, Henry Leighton Goudge, was made Regius Professor of Divinity at Oxford, the family left Ely and went to Christ Church, Oxford.

Goudge's first book, The Fairies' Baby and Other Stories (1919), was a failure and it was several years before she authored Island Magic (1934), which is based on Channel Island stories, many of which she had learned from her mother, who was from Guernsey.

Goudge was awarded the Carnegie Medal for The Little White Horse (1946), the book which J. K. Rowling, author of the Harry Potter stories, has said was her favorite as a child. The television mini-series Moonacre was based on The Little White Horse. Her Green Dolphin Country (1944) was made into a film (under its American title, Green Dolphin Street) which won the Academy Award for Special Effects in 1948.

A Diary of Prayer (1966) was one of Goudge's last works. She spent her last years in her cottage on Peppard Common, just outside Henley-on-Thames, where a blue plaque was unveiled in 2008.

Anthologies containing stories by Elizabeth Goudge
Dancing with the Dark (1997)