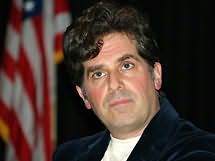 (b.1964)
Jonathan Lethem is the author of As She Climbed Across the Table, Amnesia Moon, and Motherless Brooklyn. He has been listed by Newsweek as one of their '100 People for the New Century'. He lives in Brooklyn, New York.

Corrupting Dr Nice (1997)
John Kessel
"Lucid, humane, and mercilessly funny, Corrupting Dr. Nice is a peach. If there could be great date books like there are great date movies, this would be one. Brilliant."

Stranger Things Happen (2001)
Kelly Link
"Kelly Link is the exact best and strangest short story writer on earth that you have never heard of at the exact moment you are reading these words and making them slightly inexact. Now pay for the book."

360 Flip (2004)
Molly McGrann
"The book is terrific. I read it in a couple of compulsive gulps, and found [it] vertiginous, tragic and funny."

Trance (2005)
Christopher Sorrentino
"TRANCE will be placed on the very highest shelf of that art which explains the 20th Century to the 21st."

Phone Rings (2005)
Stephen Dixon
"One of the great secret masters."

Skinny Dipping in the Lake of the Dead (2006)
Alan DeNiro
"I'm thrilled to see him in bookstores at last."

One for Sorrow (2007)
Christopher Barzak
"Barzak's sympathy and humor, his awareness, his easeful vernacular storytelling, are extraordinary."

Zeroville (2007)
Steve Erickson
"Erickson is as unique and vital and pure a voice as American fiction has produced."

Lowboy (2009)
John Wray
"John Wray is the Next Wave of American fiction, and Lowboy, his crazy excavation of New York's underground, is brilliant."

Fugue State (2009)
Brian Evenson
"Brian Evenson is one of the treasures of American story writing, a true successor both to the generation of Coover, Barthelme, Hawkes and Co., but also to Edgar Allan Poe."

The People Who Watched Her Pass By (2010)
Scott Bradfield
"Bradfield is one of my favorite living writers."

Pariah (2010)
Bob Fingerman
"Bob Fingerman is a narrative master as brilliantly adept with words as with images. His vision is urbane, riotous, and unflinching."

I Hate the Internet (2016)
Jarett Kobek
"I just got an early copy of [Kobek's] newest, I Hate the Internet, and devoured it he's as riotous as Houellebecq, and you don't need a translator, only fireproof gloves for turning the pages."