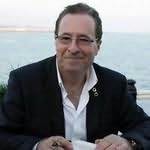 (b.1948)
Peter James is the author of several very successful thrillers, two of which have been made into successful TV films. More are in production now. He was born in 1948 and educated at Charterhouse. He lives in Sussex near Lewes.

Inspector Rebus (with Ian Rankin)
In the Nick of Time (2014)

White Bones (2003)
(Katie Maguire, book 1)
Graham Masterton
"One of the most original and frightening storytellers of our time."

Burial (2009)
Neil Cross
"Stunning... it has been a long time since I've read a novel so compelling, chilling and satisfying."

A Deadly Trade (2009)
(Detective Kubu, book 2)
Michael Stanley
"I was gripped from the first page."

The Gemini Factor (2010)
Paul Kane
"A new, scarily original fearmonger. Watch out for this guy - carefully!"

Where the Shadows Lie (2010)
(Magnus Iceland Mystery, book 1)
Michael Ridpath
"Michael Ridpath is on the war path, trouncing the Scandinavians on their home turf. This is international thriller writing at its best, fine characters, page turning suspense and a great, fresh location."

Birthdays for the Dead (2012)
(Ash Henderson, book 1)
Stuart MacBride
"MacBride is a damned fine writer - no one does dark and gritty like him."

The Thief Taker (2014)
(Thief Taker, book 1)
C S Quinn
"This is really captivating, vivid writing. Descriptions that come straight off the pages and permeate deep into your senses, and a truly electrifying pace. Quinn is a brilliant new talent!"

Pretty Girls (2015)
Karin Slaughter
"A great writer at the peak of her powers."

Solomon Creed (2015)
(Solomon Creed, book 1)
Simon Toyne
"Compelling, vivid and profound, I loved it. It stays with you long after you’ve finished the final page."

The Undesired (2015)
Yrsa Sigurðardóttir
"Yras is one most exciting new voices in the crime thriller world."

Hold Still (2016)
Tim Adler
"Hooked me from the very beginning."

Babylon Berlin (2016)
(Gereon Rath, book 1)
Volker Kutscher
"Set in atmospheric 1930s Berlin where a maverick detective is hunting a serial killer The Silent Death, like its predecessor, Babylon Berlin, owes much to its author's commitment to historical accuracy and the cynical feel of the times."

Say Nothing (2017)
Brad Parks
"Grips you in a vice from the very beginning, and shreds your emotions. Terrific, powerful storytelling at its very best. A tour de force."

The Stolen Child (2017)
Sanjida Kay
"Beautiful terse writing and the build to the shattering climax is palpable."

The One (2017)
John Marrs
"Really clever concept and some great characters and twists. It's a real joy to read something totally original, smart and thought provoking."

Here and Gone (2017)
Haylen Beck
"A brilliant, relentless rollercoaster of suspense that shreds your emotions."

The Innocent Wife (2017)
Amy Lloyd
"This is an original, assured and compelling tale of obsession. Amy Lloyd is a startling new talent, destined to become a big name."

The Never Game (2019)
(Colter Shaw, book 1)
Jeffery Deaver
"Terrific writing, vivid and raw, Deaver grips from the very first line and never lets up. He is, hands-down, one of the finest thriller writers of our time."