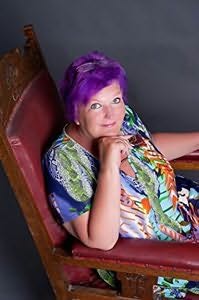 Gemma Jackson was born in the Dublin Tenements. One of her first memories is being put on the back of Roy Roger's horse Trigger. She has travelled the world gathering friends and knowledge where she could. Gemma is a true original from her purple hair to her sense of hurmour in the face of adversity.

Gemma has been feted by millionaires, danced with movie stars and lived on the street, homeless. The world has kissed her and kicked her but she gets up smiling every time.

She lived in Tehran, Iran during the reign of the Shah. She was featured in magazines and on billboards as Miss Iran Air.

She was part of the large team that put EuroDisney into Paris. Her motto in life is 'I'll try anything once. If I don't like it, I won't do it again' adding she has one child.