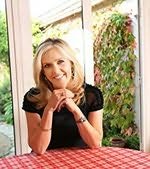 Ireland
Sinéad was born and raised in Dublin where she grew up surrounded by books. Her mother is an author of children's books. Growing up, Sinéad says she was inspired by watching her mother writing at the kitchen table and then being published. From that moment on, her childhood dream was to write a novel.

After university, she went to live in Paris and then London. It was at the age of thirty, while working as a journalist in London that she began to write creatively in her spare time. After a couple of years toying with ideas, she joined a creative writing group and began to write The Baby Trail. Shortly after the novel was published, Sinéad had a baby boy - a very happy ending to her own Baby Trail.

The Two Lives of Louis & Louise (2019)
Julie Cohen
"Wow. What a beautiful, ballsy and brilliant book."

The Gift of Friends (2019)
Emma Hannigan
"A beautiful story about fractured families, unconditional love and the importance of friendship. I read it in one sitting."

My Pear-Shaped Life (2020)
Carmel Harrington
"Warm, moving and life-affirming…Greta is a gorgeous character that you will fall in love with."