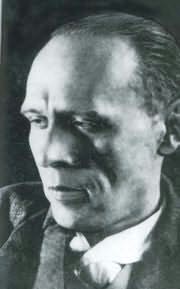 Russia (1905 - 1942)
Daniil Kharms was an early Soviet-era surrealist and absurdist poet, writer and dramatist.His reputation in the 20th century in Russia was largely based on his widely beloved work for children. His other writings (a vast assortment of stories, miniatures, plays, poems, and pseudo-scientific, philosophical investigations) were virtually unknown until 1970's, and not published officially in Russia until "glasnost".
Collections
Russia's Lost Literature of the Absurd (1971) (with Alexander Vvedensky)
Old Woman (1989)
Incidences (1993)
The Man with the Black Coat (1997) (with Alexander Vvedensky)
It Happened Like This (1998)
Today I Wrote Nothing (2007)
The Plummeting Old Women (2011)
The Charms of Harms (poems) (2011)