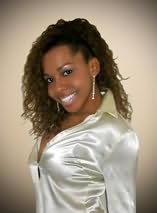 aka Joy Deja King
Deja King is emerging as a new Fictional Street Author of 2005 to be reckoned with. Born in Toledo, Ohio and raised in California, Maryland, and North Carolina respectfully, Ms. King is representing a new genre of young, hip and sexy novels that introduces readers to the complex street life. Ms. King attended North Carolina Central University (NCCU) where she majored in Journalism. With unrelenting support from her mother, King continues to climb to great heights in pursuit of success. Deciding to transfer to Pace University in New York City to delve into more of what life had to offer, she continued to major in Journalism while simultaneously gaining the experience needed to make it in this fast-paced business world. Emerging onto the entertainment scene in that late '90s, Ms. King accepted an Internship position and immediately began to work her way up the ranks at The Terrie Williams Agency. Working hands on with Johnnie Cochran, The Essence Awards, The Essence Music Festival, The NBA Player's Association, Moet & Chandon and several other Entertainment Executives and Celebrities, Ms. King worked closely with the Agency's Founder to provide impeccable Public Relations services to the company's clients. Wanting to pursue new endeavors, Ms. King's departure from the Agency came in 1999. Deciding to try the Arts, she attended the infamous Lee Strasburg Theater Institute. Upon receiving a job offer, she cut her time at the Acting Institute short to accept a creative position at Click Radio. Signing onto Click as the Director of Hip Hop Artist Relations, Ms. King developed segments featuring the biggest names in Hip Hop. Ms. King pushed her department to new levels by producing an outlet that placed hip hop in the forefront of the cyber world. Opting to take a break from Industry challenges, King changed direction to explore something even more wonderful...Motherhood. King welcomed her son, Logan Michael into the world in mid 2001. During this time she discovered her love for writing.