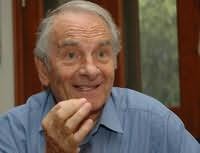 France (b.1931)
Dominique Lapierre was born in Châtelaillon-Plage, Charente-Maritime, France. At the age of thirteen, he travelled to America with his father who was a diplomat (Consul General of France). He attended the Jesuit school in New Orleans and became a paper boy for the New Orleans Item. He developed interests in travelling, writing and cars.