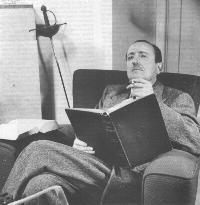 aka Carter Dickson
John Dickson Carr was born in Uniontown, Pennsylvania, in 1906. It Walks by Night, his first published detective novel, featuring the Frenchman Henri Bencolin, was published in 1930. Apart from Dr Fell, whose first appearance was in Hag's Nook in 1933, Carr's other series detectives (published under the nom de plume of Carter Dickson) were the barrister Sir Henry Merrivale, who debuted in The Plague Court Murders (1934).