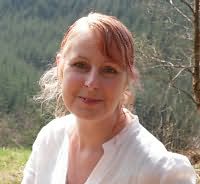 Jane was, presumably, born, although everyone concerned denies all knowledge. However there is evidence that her early years were spent in Devon (she can still talk like a pirate under the right conditions) and of her subsequent removal to Yorkshire under a sack and sedation.

She now lives in North Yorkshire, where she writes romantic comedies and labours under the tragic misapprehension that Johnny Depp is coming for her any day now. Owing to a terrible outbreak of insanity she is now the minder of five cats and three dogs - just as the five kids showed signs of leaving home, and she has to spend considerable amounts of time in a darkened room as a result (of the animals, not the kids leaving home).
Jane's likes include marshmallows, the smell of cucumbers and the understairs cupboard, words beginning with B, and Doctor Who. She writes with her laptop balanced on her knees whilst lying on her bed, and her children have been brought up to believe that real food has a high carbon content. And a kind of amorphous shape.

Non fiction
How to Write Romantic Comedy (2019) (with Rhoda Baxter)