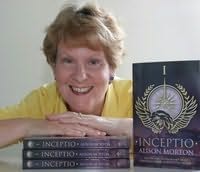 (A M Morton)
A 'Roman nut' since age 11, walking on the mosaics in Ampurias, Spain triggered her wondering what a Roman society run by women would be like.

Playing around with words much of her life, including as a local magazine editor and professional translator, she fixed this idea into novels in reaction to a dire film:
'I could do better that that,' she whispered in the darkened cinema.
'So why don't you?' replied her other half. INCEPTIO was published March 2013, shortlisted for the 2013 International Rubery Book Award and awarded a B.R.A.G. Medallion. In January 2014, INCEPTIO reached #1 in Amazon's Alternate History list and #2 in Historical Thrillers. The sequel, PERFIDITAS, was published in October 2013 and third, SUCCESSIO, is out June 2014.