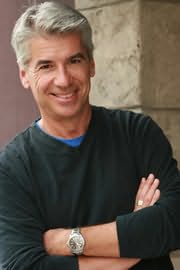 (b.1955)
D.J. MacHale was raised in Greenwich, CT where he had several jobs including collecting eggs at a poultry farm; engraving trophies and washing dishes in a steakhouse - in between playing football and running track. &D.J. graduated from New York University with a BFA in film production.

D.J. lives in Southern California with his wife and daughter. They are avid backpackers, scuba divers and skiers. Rounding out the household is a spoiled golden retriever named Casey and an equally spoiled tuxedo cat named Jinx.

Series contributed to
Are You Afraid of the Dark? (with Kathleen Derby)
4. The Tale of the Nightly Neighbors (1995)

Expedition to Blue Cave (2007)
(Outriders, book 1)
Ed Decter
"Man I want to hang with Cam Walker and the Outriders!"

A Crack in the Sky (2010)
(Greenhouse Chronicles, book 1)
Mark Peter Hughes
"A peek into the future that is both fascinating and frightening."

Game of Shadows (2017)
Erika Lewis
"One of those thrilling tales you can't put down . . . the perfect blend of imaginative world-building and nonstop action wrapped up in a compelling mystery."