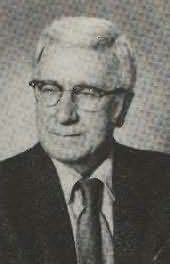 (1903 - 1981)
Harold Warner Munn was an American writer of fantasy, horror and poetry. He was an early friend and associate of authors H. P. Lovecraft and Seabury Quinn. He has been described by fellow author and Seattle resident Jessica Amanda Salmonson, who interviewed him in 1978, as "the ultimate gentleman" and "a gentle, calm, warm, and good friend." He was known for his intricate plotting and the careful and voluminous research that went into all his stories, a habit he traced back to two mistakes made when he wrote his early story "The City of Spiders."

In addition to writing, Munn collected books and classic pulp magazines, including Air Wonder Stories, Amazing Stories, Astounding and other science fiction titles, along with Argosy, Argosy All Story, Cavalier, Weird Tales to the end of the Wright run, and others. Also in his library were self-manufactured books consisting of serialized stories extracted from magazines, notably works by George Allen England such as Darkness and Dawn. About three fourths of his collection was ruined by exposure to weather during a move and had to destroyed.

In his last years Munn lived in Tacoma, Washington in a house he built himself. He did his writing either in his living room or in the attic room that constituted his library. During this time he was working on an additional volume of the Merlin series to be called The Sword of Merlin, which he did not live to finish.