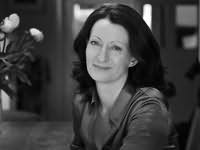 Kathleen MacMahon is a writer and journalist.

Her first novel, This is How it Ends became the sensation of the London Book Fair in 2011 when it was bought by the Little, Brown Book group in the UK and Grand Central Publishing in the US. The novel was shortlisted for the Kerry Group Irish Book of the Year award, as well as two Bord Gáis Energy Irish Book Awards and was chosen by the public as runner-up in the Liveline listeners poll for Book of the Year 2012. It spent five weeks at number one in the Irish bestseller lists, and has been translated into twenty-two languages.

Kathleen was born in Ireland but spent her early childhood living in Nicaragua and Brazil before returning with her family to Dublin. She studied English and History at UCD and went on to take a Masters in European Studies at Cambridge University. She spent the next fifteen years working for Irelands state broadcaster RTÉ, starting out as a radio journalist on the stations flagship Morning Ireland programme, where she won a National Media Award for her reporting. She spent five years on the daily News at One programme before moving across the newsroom to the foreign desk, where she reported on world events for television.
Novels
This Is How It Ends (2012)
The Long Hot Summer (2015)
Nothing But Blue Sky (2020)