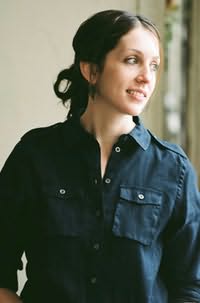 Liz Moore is a writer, musician, and teacher.

She wrote most of her first novel, The Words of Every Song (Broadway Books, 2007), while in college. The book, which centers on a fictional record company in New York City just after the turn of the millennium, draws partly on Liz's own experiences as a musician. It was selected for Borders' Original Voices program and was given a starred review by Kirkus. Roddy Doyle wrote of it, "This is a remarkable novel, elegant, wise, and beautifully constructed. I loved the book."

After the publication of her debut novel, Liz released an album, Backyards, and obtained her MFA in Fiction from Hunter College. After being awarded the University of Pennsylvania's ArtsEdge residency, she moved to Philadelphia in the summer of 2009. She is now an Assistant Professor of Writing at Holy Family University in Philadelphia, where she lives.

Her second novel, Heft, was published by W.W. Norton in January 2012 to popular and critical acclaim. Of Heft, The New Yorker wrote, "Moore's characters are lovingly drawn...a truly original voice"; The San Francisco Chronicle wrote, "Few novelists of recent memory have put our bleak isolation into words as clearly as Liz Moore does in her new novel"; and editor Sara Nelson wrote in O, The Oprah Magazine, "Beautiful...Stunningly sad and heroically hopeful." The novel was published in five countries, and its audiobook was named to RUSA's 2013 Listen List and was a finalist in the Literary Fiction category of the Audies Competition.

Moore's short fiction and creative nonfiction have appeared in venues such as Tin House, The New York Times, and Narrative Magazine. She is the winner of the Medici Book Club Prize and Philadelphia's Athenaeum Literary Award. In November 2013, her novel Heft was long-listed for the International IMPAC Dublin Literary Award. The winner will be announced in 2014.

Her third novel is forthcoming from W.W. Norton.

Raising the Dad (2018)
Tom Matthews
"Raising the Dad is a quickly engaging novel that is both timely and timeless, with vivid, original characters that the reader will feel connected to immediately and lively writing that tells an intriguing story."

A Crooked Tree (2021)
Una Mannion
"I was quickly brought under the spell of this novel, which is filled with pathos, nostalgia, and the best kind of suspense. Una Mannion has beautifully captured the experience of being a child on the verge of adulthood, struggling to fill in the gaps in her understanding of the world around her without much help or mentorship. This is a novel about the way that adults fail children, but also about the moment a child first understands that the adults around her are human--and the empathy that comes with that realization."