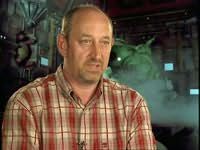 aka Grant Naylor
Douglas R. Naylor is a British comedy writer, science fiction writer, director and television producer. He is best known as half of the writing team of the lnog-running BBC sci-fi comedy Red Dwarf (1988-2009), which is a worldwide cult hit.

Naylor was born in Manchester, England and studied at the University of Liverpool. In the mid-1980s, Naylor wrote two regular comedy sketch shows for BBC Radio 4 entitled Cliché and Son of Cliché. These sketch shows were scripted by Naylor along with another writer, Rob Grant. This writing partnership was successful with Naylor and Grant going on to co-write and produce numerous BBC television series throughout the 1980s and 1990s. These included programmes such as Comic Relief, Spitting Image, and The 10 Percenters.