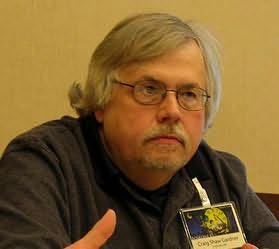 aka Peter Garrison
Craig Shaw Gardner has written bunches of books, beginning with a number of funny fantasies with names like A MALADY OF MAGICKS, SLAVES OF THE VOLCANO GOD, and THE OTHER SINBAD. His somewhat more serious books include the Dragon Circle (beginning with DRAGON SLEEPING) and the Changeling Saga (starting with THE CHANGELING WAR). He has also collected a bunch of his horror stories into a book called A COLD WIND IN JULY.
Craig has also done a whole bunch of media tie-in projects over the years, the most popular of which was the New York Times bestselling novelization of BATMAN (the Tim Burton version). As a part of this project, Craig actually got to walk around Gotham City (or at least the set at the movie studio.) Alas, they would not let him sit in the Batmobile.

Buffy the Vampire Slayer (For Mature Audiences)
2. Return to Chaos (1998)