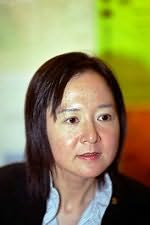 Japan (b.1962)
Yoko Ogawa is a Japanese novelist, born in Okayama prefecture in 1962. She won one of the most important prize in 1988 with her debut novel, "Agehachou ga kowareru toki (When the swallowtail breaks)" and since then she became one of the leading novelist in Japan.

Genres: Literary Fiction, Science Fiction
Novels
The Gift of Numbers (2007)
aka The Housekeeper and the Professor
Hotel Iris (2010)
The Memory Police (2019)

Convenience Store Woman (2018)
Sayaka Murata
"Choosing to give your novel a narrator who is not normal, someone who is aware that there is something strange about herself, is not an easy choice. Flaunting strangeness as a privilege sometimes repels the reader. But Convenience Store Woman skilfully evades this reaction. When the protagonist, a social outcast, is placed within the box of the artificially normalized convenience store, we begin to vividly see the strangeness of the people in the world outside."

A Man (2020)
Keiichiro Hirano
"Hirano has continued to grapple with new themes ever since his debut. In this work, he has arrived at the primal question of what validates human existence."

Touring the Land of the Dead (2021)
Maki Kashimada
"The tense disquiet that hangs over the work has a unique charm. This is a world that only Kashimada could have depicted."