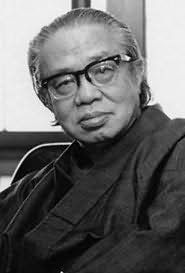 Japan (1909 - 1992)
Seichō Matsumoto was a prolific Japanese writer and journalist, awarded the Akutagawa Prize in 1952 as well as the Mystery Writers of Japan Prize. He was born in the city of Kokura, now Kokura Kita ward, Kitakyushu, Fukuoka prefecture. His real name was Kiyoharu Matsumoto; "Seichō" is the Sino-Japanese reading of his given name characters. Matsumoto wrote not only mystery/detective fiction but historical novels and nonfiction. He also has collaborated with film director Yoshitaro Nomura on adapting eight of his novels to film, including the Castle of Sand, which is considered to be one of the masterpieces of Japanese cinema.