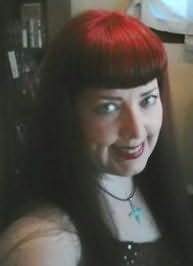 A native of Southern California, Christine Pope has been writing stories ever since she commandeered her family's Smith-Corona typewriter back in the sixth grade. Many reams of dead trees later, her debut novel, Fringe Benefits, was published by Pink Petal Books on April 8, 2010. Her short fiction has appeared in Astonishing Adventures, Luna Station Quarterly, and the new journal of dark fiction, Dark Valentine.

While Fringe Benefits is a straight contemporary romance, she writes in a variety of genres, including paranormal romance, fantasy, horror, science fiction, and historical romance. She blames this on being easily distracted by bright, shiny objects, which could also account for the size of her shoe collection.

After spending many years in the magazine publishing industry, she now works as a freelance editor in addition to writing fiction. She lives with her husband and an explosively fluffy Pomeranian mix. Her house is pink, but don't hold that against her.