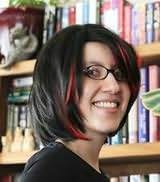 Gigi Pandian is the child of cultural anthropologists from New Mexico and the southern tip of India. After being dragged around the world during her childhood, she tried to escape her fate when she left a PhD program for art school. But adventurous academics wouldnt stay out of her head. Thus was born the Jaya Jones Treasure Hunt Mystery Series.

Gigis debut mystery novel, Artifact, was awarded a Malice Domestic Grant and named a Best of 2012 Debut Novel by Suspense Magazine. The follow-up is Private Vishnu.

Omnibus
Other People's Baggage (2014) (with Kendel Lynn and Diane Vallere)