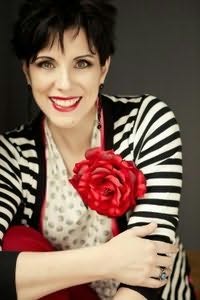 (b.1968)
Deanna Raybourn graduated from the University of Texas at San Antonio in English and History and an emphasis on Shakespearean Studies. She taught high school English for three years in San Antonio before leaving education to pursue a career as a novelist.
Fourteen years later, she signed a three-book deal with MIRA Books. "Sex, lies and awesome clothing descriptions" is how one reader has described Deanna`s debut novel, Silent in the Grave, published in December 2007. The first in the Silent series, the book follows Lady Julia Grey as she investigates the mysterious death of her husband with the help of enigmatic private inquiry agent Nicholas Brisbane. From the drawing rooms of the aristocracy to a Gypsy camp on Hampstead Heath, Silent in the Grave deftly captures the lush ambience of Victorian London.
Deanna makes her home in Virginia, where she lives with her husband and daughter.

Jane and the Madness of Lord Byron (2010)
(Jane Austen Mysteries, book 10)
Stephanie Barron
"From its deftly crafted mystery to its pitch-perfect Regency tone, this book is a delight."

The Anatomist's Wife (2012)
(Lady Darby Mystery, book 1)
Anna Lee Huber
"A riveting debut... An original premise, an enigmatic heroine, and a compelling Highland setting... A book you won't want to put down."

A Desperate Fortune (2015)
Susanna Kearsley
"Susanna Kearsley deftly conjures both historical intrigue and a contemporary heroine as unique as she is memorable."

The Mayfair Affair (2015)
(Rannoch Fraser Mystery, book 9)
Tracy Grant
"Unravel the secrets and lies at the heart of an almost impenetrable mystery..thrilling."

The Countess of Prague (2017)
(Countess of Prague Mystery, book 1)
Stephen Weeks
"Hooray for Countess Trixie! Stephen Weeks has conjured a breath of fresh air with this colorful and memorable character. Fans of Elizabeth Peters will be charmed by the intrepid countess and her cast of valiant helpers. With its exotic setting and the promise of many more adventures to come, THE COUNTESS OF PRAGUE is sure to delight."

The Broken Girls (2018)
Simone St James
"With the moldering ruin of a boarding school, a malicious ghost, and secrets that will not stay buried, The Broken Girls promises much and more than delivers. Each new twist is served with calculated, masterful precision.... A vivid, riveting story you won't soon forget."

Searcher of the Dead (2018)
(Bess Ellyott Mystery, book 1)
Nancy Herriman
"This is the book Agatha Christie would have written if she had worn a farthingale."

Murder Knocks Twice (2019)
(Speakeasy Murders Mystery, book 1)
Susanna Calkins
"There’s nothing like a slick and sassy speakeasy for atmosphere, and MURDER KNOCKS TWICE delivers. The secrets are as heady as bathtub gin in this smart 1920s mystery that will keep you guessing."

The Widow of Rose House (2019)
Diana Biller
"Utterly irresistible. With engaging, original characters and dialogue as crisp as a new apple."

The King's Justice (2020)
(Maggie Hope, book 9)
Susan Elia MacNeal
"Inimitable, indefatigable, intrepid--there simply are not enough good adjectives to describe Maggie Hope. The latest installment of Susan Elia MacNeal's masterful series brings us a wiser and wounded Maggie, one who defuses bombs and buzzes around London on her motorbike, drowning her demons in pink gin and pitting her wits against a serial killer determined to have the last laugh. I was riveted from the first page to the last, rooting for Maggie all the way. Reading her latest adventure is like walking a tightrope made of razor wire."

The Conductors (2021)
(Murder and Magic, book 1)
Nicole Glover
"Nicole Glover blends historical detail and magical elements into an unforgettable debut. The Conductors is a wholly original and thoroughly riveting story. This is no doubt the first of many brilliant books to come."