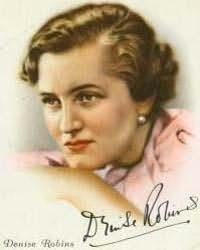 aka Denise Chesterton, Ashley French, Harriet Gray, Hervey Hamilton, Julia Kane, Francesca Wright
Denise Naomi Klein was born on 1 February 1897 in London, England, daughter of Herman Klein (1856-1934) and Kathleen Clarice Louise Cornwell(1872-1954). Her parents married on 19 February 1890 at the West London Synagogue, her father was a English music critic, author and teacherof singing and her mother was a Australian-born heiress, 16 years younger than him. Denise had a half-sister, Sibyl Klein, who became an actress. She also had two older brothers, Adrian Bernard L. Klein(1892-1969), who later changed his name to Adrian Cornwell-Clyne and wrote books on photography and cinematography, and Daryl Kleyn (b. 1894). Duringher parents marriage, her mother began an affair with a young Worcestershire Regiment officer, Herbert Arthur Berkeley Dealtry (b. 1878). When her fatherbecame aware of it, he filed a petition for divorce, which was granted in December 1901. After the divorce, her mother married Dealtry in 1902,but they were going through financial difficulties. They had to declare bankruptcy in 1905. The sameyear her father remarried with Helene Fox, a Christian Science practitioner of Boston, Massachusetts.

As Kit Dealtry, her mother began topublish her own writings, first short stories in magazines an later gothic novels. Years later, and single again her mother returned to London. In1918, and remarried for a third time with Sydney H. Groom, andstarted to sign her novels as C. Groom, Mrs Sydney Groom, Kathleen ClariceGroom and Clarice Groom. After Naomi left school, she decided follow in hermother's footsteps, and to publish her writings. She went to work as ajournalist for the D.C. Thomson Press, then became a freelance writer.Denise married Arthur Robins, a corn broker on the Baltic Exchange, but the marriage ended in divorce, after she met O'Neill Pearson in Egypt, who laterbecame her second husband. She was the mother of three daughters, Patricia Robins (also know as Claire Lorrimer) who became another best-sellingromance author, Anne, and Eve.

As a writer of fiction, Denise wrote short stories, plays and about 200 gothic romance novels under a variety of pseudonyms, including: Denise Chesterton, Hervey Hamilton, Francesca Wright, Ashley French, Harriet Gray, and Julia Kane, she also used to sign the books her first married name,Denise Robins, and some of her books were reedited under this pen-name. In1927, over ten years after she began to publish, Denise meet Charles Boon,of Mills & Boon, and she signed her first contract with his firm the sameyear. In a short time, she became the best paid Mills & Boon's writer, and one of the most prolific, but in 1935 she changed to a new publisher, Nicholson& Watson, that made her a better offer, and later with Hodder & Stoughton.During her very long career she worked with major publishing houses. Taylor Caldwell said: "Rarely has any writer of our times delvedso deeply into the secret places of a woman's heart." As in her real life,many of her novels are love triangles, and also appear as a backdrop the World Wars.

In 1960, she founded with other romance writers the "Romantic Novelists' Association" (R.N.A.), and she was its first president until 1966. In 1965,she wrote her autobiography, "Stranger Than Fiction". Denise passed away 1May 1985 in her native England. At the time of her death her novels, translated into 15 languages, had sold more than 100 million copies. In 1984,they were borrowed more than 1.5 million times from British libraries.

Anthologies edited
The World of Romance (1964)