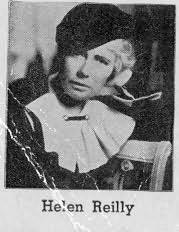 aka Kieran Abbey
Helen Reilly was an American novelist. She was born Helen Kieran and grew up in New York City in a literary family. Her brother, James Kieran, also wrote a mystery, and two of her daughters, Ursula Curtiss and Mary McMullen, are mystery writers.

Reilly's early books were police procedurals based on her research into the New York Homicide squad. Her most popular character is Inspector Christopher McKee. Reilly also used the pseudonym Kieran Abbey.