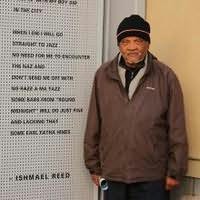 (b.1938)
Ishmael Reed is an acclaimed multifaceted writer whose work often engages with overlooked aspects of the American experience. He has published ten novels, including Flight to Canada and Mumbo Jumbo, as well as plays and collections of essays and poetry. He was nominated for a National Book Award in both poetry and prose in 1972. Conjure (1972), a volume of poetry, was nominated for a Pulitzer Prize, and his New and Collected Poems: 1964–2006 (2007) received a Gold Medal from the Commonwealth Club of California. Reed has also received a Lila Wallace–Reader’s Digest Award, a Guggenheim Fellowship, a Blues Song Writer of the Year award from the West Coast Blues Hall of Fame, a Rosenthal Family Foundation Award from the National Institute for Arts and Letters, and a MacArthur Fellowship. Reed taught at the University of California, Berkeley, for thirty-five years and currently lives in Oakland, California.
Novels
The Freelance Pallbearers (1967)
Yellow Back Radio Broke-Down (1969)
Mumbo Jumbo (1972)
The Last Days of Louisiana Red (1974)
A Secretary to the Spirits (1978)
The Terrible Twos (1982)
Reckless Eyeballing (1986)
Flight to Canada (1989)
The Terrible Threes (1989)
Japanese by Spring (1993)
Juice! (2011)
Conjugating Hindi (2018)
The Terrible Fours (2021)

Chapbooks
Cab Calloway Stands in for the Moon (1986)