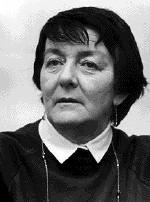 (Cherry Barbara Grimm)
New Zealand (1930 - 2002)
Cherry Wilder was an important writer of science fiction and fantasy novels and short fiction in the last quarter of the twentieth century. A writer whose work both entertained and also challenged rigid social mores, her best-known works are the Rulers of Hylor trilogy, a high fantasy work comprised of A Princess of the Chameln, Yorath the Wolf and The Summer's King and the science fiction first-contact Torin trilogy comprised of The Luck of Brin's Five, The Nearest Fire and The Tapestry Warriors. Born in New Zealand, she used Maori folklore and legends to inform the background of the Torin trilogy.

Ms. Wilder's fiction, both novel length and shorter works, ranges well beyond epic fantasy and hard science fiction to include dark fantasy, horror and the weird, as well as mysteries and thrillers. Cruel Designs is a stand-alone contemporary dark fantasy novel that evokes horror by its allusion to people and events in Nazi Germany, the consequences of whose actions cast a dark pall over the residents of a house decades later.

Collections
Dealers in Light and Darkness (1995)