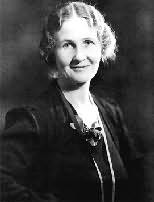 (1890 - 1961)
Cousin of Rudyard Kipling, Mother of Colin MacInnes
Angela Margaret Thirkell was an English and Australian novelist. She also published one novel, Trooper to Southern Cross, under the pseudonym Leslie Parker.

The daughter of a classical scholar, Thirkell was also the cousin of Rudyard Kipling. Her novels, usually peopled with genteel, snobbish characters, are noted for their gentle irony, absurdity of tone, and understated sophistication. Some of her better known novels include Coronation Summer (1937), Pomfret Towers (1938), The Brandons (1939), Northbridge Rectory (1941), Growing Up (1943), Headmistress (1945), Miss Bunting (1946), and The Duke's Daughter (1951).

Collections
The Brandons and Others (1968)
Christmas at High Rising (2013)