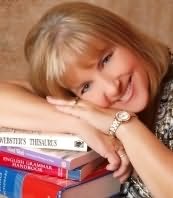 Lizbeth Selvig writes fun, heartwarming contemporary romantic fiction for Avon books. Her debut novel, The Rancher and the Rock Star, was released in 2012. Her second, Rescued By A Stranger is available now. Liz lives in Minnesota with her best friend (aka her husband), a hyperactive border collie named Magic and a gray Arabian gelding named Jedi.

After working as a newspaper journalist and magazine editor, and raising an equine veterinarian daughter and a talented musician son, Lizbeth entered Romance Writers of Americas Golden Heart® contest in 2010 with The Rancher and the Rock Star (then titled Songbird) and won the Single Title Contemporary category. In her spare time, she loves to hike, quilt, read, horseback ride, and play with her four-legged grandchildren, of which there are nearly twenty, including a wallaby, an alpaca, a donkey, a pig, two sugar gliders, and many dogs, cats and horse.
Series
Seven Brides for Seven Cowboys
1. The Bride Wore Denim (2015)
2. The Bride Wore Red Boots (2015)
3. The Bride Wore Starlight (2016)
4. Betting On Paradise (2017)

Series contributed to
Chandler County
Missing By a Heartbeat (2017)