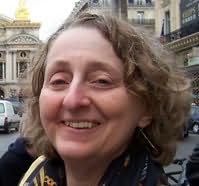 (b.1947)
Sarah Smith has lived in Japan, London, and Paris. A Harvard Ph.D., she is a former film teacher with a special love for the early films she evokes in this book. She is also the author of the New York Times Notable Books The Vanished Child and The Knowledge of Water. She lives near Boston, Massachusetts, with her husband, two teenagers, and two cats. She is Webmaster for the Mystery Writers of America.

Wicked City (2012)
(Zephyr Hollis, book 2)
Alaya Dawn Johnson
"Zephyr Hollis is a tender-hearted stunner of a heroine, and her supernatural New York is a page-turning delight."