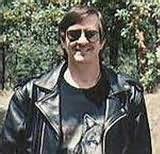 A pseudonym used by David Robbins
Using his own name or one of half a dozen pseudonyms, David Thompson has published over 130 books nationally. He has written Westerns, science fiction, horror, adventure, and historical novels. Over two million copies of his books have been sold.Raised on a farm, he worked a variety of jobs before settling on writing. He has served in the Air Force, operated radio stations, painted houses, worked as a cook, and served as a deputy sheriff.