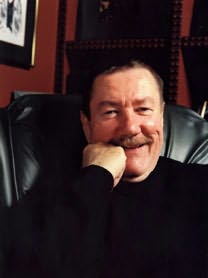 (1932 - 2010)
Robert B. Parker began writing in 1971 while teaching at Boston's Northeastern University. Now he is acknowledged as the dean of American crime fiction and was named Grand Master by the Mystery Writers of America (2002). His novels featuring the wise-cracking, street-smart Boston private-eye Spenser have earned him a devoted following and reams of critical acclaim. The Spenser character inspired the television series Spenser: For Hire and a number of made-for-television films.

Books about Robert B Parker
The Robert B. Parker Companion (2005) by Elizabeth Foxwell and Dean James
In Pursuit of Spenser (2012) by Otto Penzler

Rules of Prey (1989)
(Lucas Davenport, book 1)
John Sandford
"A cop and a killer you will remember for a long, long time."

The Guardian (1996)
Bill Eidson
"The Guardian is first-rate stuff; lean prose, compelling story, and verve in the telling. Don't miss it."

Void Moon (1999)
Michael Connelly
"In Void Moon, as in all of Michael Connelly's books, you care about the people, you care what happens to them, and you can't stop reading until you find out. Connelly is so good he's beginning to annoy me."

The Vicious Circle (2007)
Otto Penzler
"Otto Penzler knows more about crime fiction than most people know about anything."