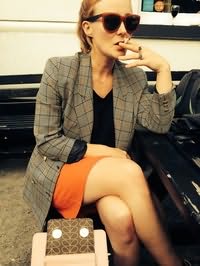 Emma Jane Unsworths first novel Hungry, the Stars and Everything (Hidden Gem) won a Betty Trask Award from the Society of Authors and was shortlisted for the Portico Prize 2012. Her short story I Arrive First was included in The Best British Short Stories 2012 (Salt). She has worked as a journalist, a columnist for The Big Issue, and a barmaid. Her second novel Animals was published by Canongate in May 2014 and won a Jerwood Fiction Uncovered Prize 2015. She is writing a third novel, as well as the screenplay of Animals, which has been optioned by BAFTA-nominated producer Sarah Brocklehurst and awarded development funding by the BFI.

Not Working (2016)
Lisa Owens
"Owens is a comic genius and a beautiful writer. Not Working is so clever and original, pithy and poignant, capturing the voice of a bright, lost generation."

Harmless Like You (2016)
Rowan Hisayo Buchanan
"What a beautiful book. So measured and confident for a debut - really impressive stuff."

Stronger Than Skin (2017)
Stephen May
"Full of warmth with a dark, complex heart."