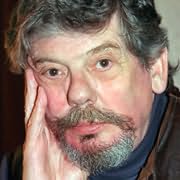 Netherlands (1931 - 2008)
Janwillem Lincoln van de Wetering was the author of a number of works in English and Dutch. He was particularly noted for his detective fiction, his most popular creations being Grijpstra and de Gier, a pair of Amsterdam police officers who figure in a lengthy series of novels and short stories. Most of the mysteries are rich with images from Amsterdam, where most of them take place; some also feature a cat named Oliver. He also wrote stories for children and nonfiction works. He usually wrote in Dutch and then in English; the two versions often differ considerably.

San Francisco Noir (2005)
(Akashic Noir)
Peter Maravelis
"I was wondering about the city's shadowside that the guides didn't show. These top writers are of the 'As bad as it gets' brand, and then worse. If you like puke, fear & loathing caused by stray bullets, happenstance getting the hero who is an anti-hero really, a male corpse rotting in the bathtub while the woman poops in the garden, the Reverend Christmas shot in the ear by the PO-lice, then this is your good read for a murky, maybe even gritty, weekend."
Visitors to this page also looked at these authors
Ellis Peters
Simone Van Der Vlugt
Fred Vargas
Nicolas Freeling
Robert van Gulik
Martin Walker
Nicola Upson
Robert B Parker
S J Rozan
Cara Black
Olen Steinhauer
Jassy Mackenzie
Émile Zola
Qiu Xiaolong
Lynda La Plante
Karen White