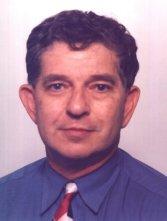 (1934 - 2009)
Stuart M. Kaminsky is the author of over 50 published novels, 5 biographies, 4 textbooks and 35 short stories. He also has screenwriting credits on four produced films including ONCE UPON A TIME IN AMERICA, ENEMY TERRITORY, A WOMAN IN THE WIND and HIDDEN FEARS. He is a past president of the Mystery Writers of America and has been nominated for six prestigious Edgar Allen Poe Awards including one for his short story "Snow" in 1999. He won an Edgar for his novel A COLD RED SUNRISE, which was also awarded the Prix De Roman D'Aventure of France. He has been nominated for both a Shamus Award and a McCavity Readers Choice Award. Kaminsky wrote several popular series including those featuring Lew Fonesca, Abraham Lieberman, Inspector Porfiry Petrovich Rostnikov, and Toby Peters. He also wrote two original Rockford Files novels.

Picture Postcard (1990)
(Matthew Riordan Mystery, book 4)
Fredrick D Huebner
"Judgment by Fire was terrific, and Picture Postcard is even better. No one writes better novels about lawyers than Fredrick Huebner."

The Miracle Strip (1998)
(Sierra Lavotini, book 1)
Nancy Bartholomew
"Nancy Bartholomew is a major new talent in the mystery field. Her characters crackle to life and her tale moves without a false note and at a pace that should be the envy of many well-known writers in the field who have forgotten that character, story, and pace are all essential. Nancy is terrific."

The Jewel of the North (2001)
(Jack London)
Peter King
"Dazzleing... A tale of high adventure and mystery worthy of Jack London himself."