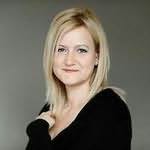 Her first mystery novel, Dark September, for which she was awarded the Danish Crime Academy's debut prize, was published in 2006. Since then, her bestselling books have been translated into several languages.

She loves to travel and get inspiration to her books from all over the world, but lives in the outskirts of the town of Aarhus, the second largest city in Denmark, close to the forest and the sea. In this beautiful place, she got a degree in English and worked as a translator for many years.

Today, Inger Wolf works as a full-time author. The household also includes a dog called Harry Hole, named after one of her favorite detectives, and a cat called Mis (Kitty).